Fourth District lends its assistance to the Chief Executive Panel

Late last night, a fleet from Fourth District under the command of Caldari Independent Navy Reserve left The District to Malkalen solar system, to give its support to the Chief Executive Panel, who had been contacted earlier by the Isukone Corporation for an humanitarian mission to Caldari Prime. The goal was to escort 4 Rhea freighters to the system of Luminaire, were it would be contacted and escorted at the border by the Federation Navy. 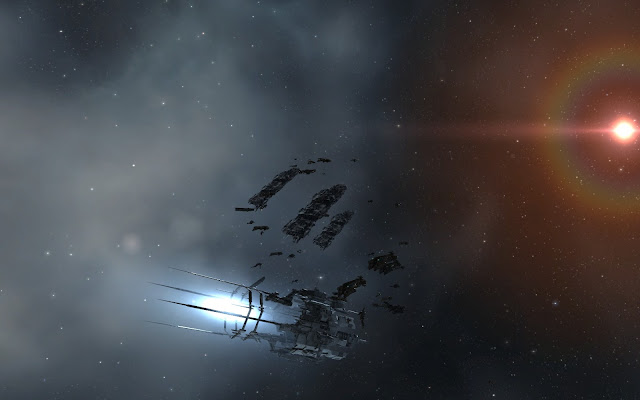 Fourth District fleet took every precaution, and moved a fleet of 26 capsuleer pilots. Attack battle cruisers and logistics with recon ECM and warp disruptor recon ships made up the Fourth escort group. Acting Fleet Commander Nidia Masters was coordinating with other capsuleer organizations to make sure that the route was coordinated and as efficient as possible, this included also Federation capsuleer presence whom had been contacted by its government to lend its support for the escort. These were the same capsuleers that lend its support to shot down the Caldari titan last Friday. Words from the commanding officers of CAIN, the talk was short and to the point, with very little small talk. This was no pleasure cruise, it was a mission to secure that aid could come to those affected but the devastating crash of the titan.

The escort was not without incidents, closing in midways to Luminaire, Ishukone got information of a ambush of a Goonswarm terrorist group in Uedama solar system. That triggered both Gallente and State loyal forces, scouts reported the systems gates clear, but a long waiting for Intel from Ishukone made many nervous. Finally orders came from acting Fleet Commander Nidia Masters that District fleet would head without delay to Seyllin system, and to clear out and hold that system to any cost. The rhea freighters jumped then to the gate that Fourth District forces was guarding and continued to Luminaire. In Luminaire Federation Navy took control of the freighters and continued to escort it to station. Many of the CAIN pilots did not stay for long in Federation space. Many have fought a long war with the Federation and are considered criminals due to that. Federation Navy, did take down Falcon pilot "Lord" Shrewsberry. But because of the nature of his mission to Federation controlled space not was with hostile intent, he was released short after.

The Caldari Independent Navy Reserve, was happy to lend it support to the Chief Executive Panel, and hopes this will foster continued good relations with the State and the CEP.