CAIN holds meeting over the appearance of "Drifters" in system


With the appearance of the undentified structure 2 months back, Fourth District system of I-MGAB (more locally known as "Ayem") has been on a higher alert. Fourth District News Service received information that individual combat and research vessels has been patrolling the area trying to figure out what the purpose was and if it posed a treat to the District. Just recently the the structure became fully visible and the so called "Circadian Seekers" began to appear. Only one time the confrontation became hostile but no information or communication has been successful.

With the appearance of the "station" or "communication tower" and strange unknown battleship in the system, Fourth District has again reacted by increasing the patrol in the area.
The battleship that has been identified from other part of new Eden as Drifters and has put the empire on high alert forced a quick meeting shortly after the structure became fully visible.

Capsuleers mostly from CAIN but also from Copperhead joined in with Captain Demion Samenel, Alliance Executive Officer from Fourth District, to discuss the matter at hand.

After the meeting Cpt. Demion Samenel summarized the meeting as successful and he then assured us the they are doing everything they can to determine the reason behind the appearance.

"As of now we dont consider them hostile and we will not engage them until we can make a more detail assessment of their purpose. We will stay in contact with other alliances and also via our office in Nonni with both Caldari Navy and the CEP to see if the poses a threat to us our the State."- Captain Samenel tells to the Fourth District News Service.

With its latest report the Aurora Arcology has delayed its continued effort of bring colonists to the planet. According the Mrs.Ymladris and the Ayem Development Board, the colony hosts 70 000 inhabitants. The goal was set last year to have 100,000 by the end of December. This was not reached due to the appearance of the Jovian structure.

You can read of the continue effort of Ayem colony here

And the Director of the project and member of the development board Jandice Ymladris continues to to report the developments in Aurora Arcology Newsfeed. 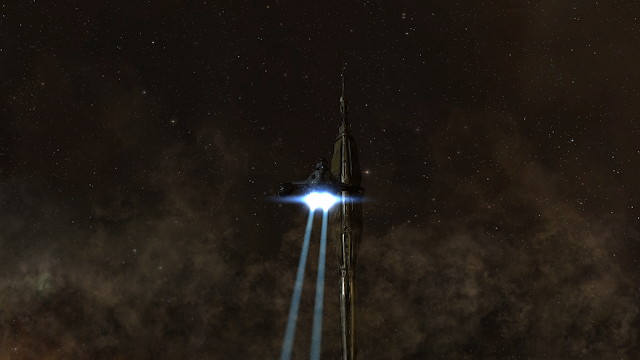