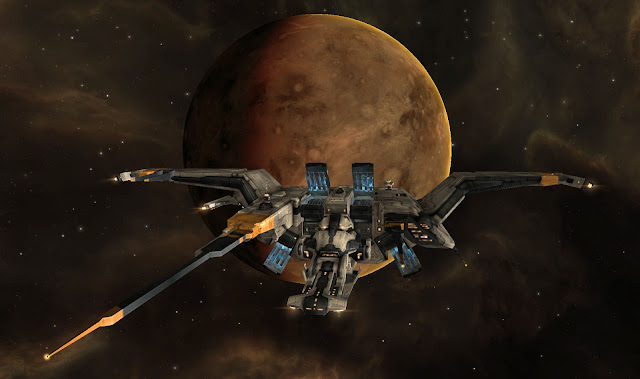 CNR Procella, the Golem-class battleship slipped from the Kaalakiota station’s dock. The powerful engine clusters lit, and slowly accelerated the capsuleer's ship away. Throughout the halls, overhead speakers kick on, announcing to the crew, "Prepare for warp, load missiles". Hakato Mizuki willed his ship to a new vector, and started to spool up the warp drives. Once at full power, the ship momentarily stopped before being launched into warp. A flicker of light played off the ship's hull as the shield generators kicked on, the energy shimmering across the various windows. It shuddered from deceleration and offered a last minute of peace for the crew before missiles start to fly from their rails. A single technician, responsible for the Launcher #1, shuddered at the thought of death. The capsuleer simply smiled.